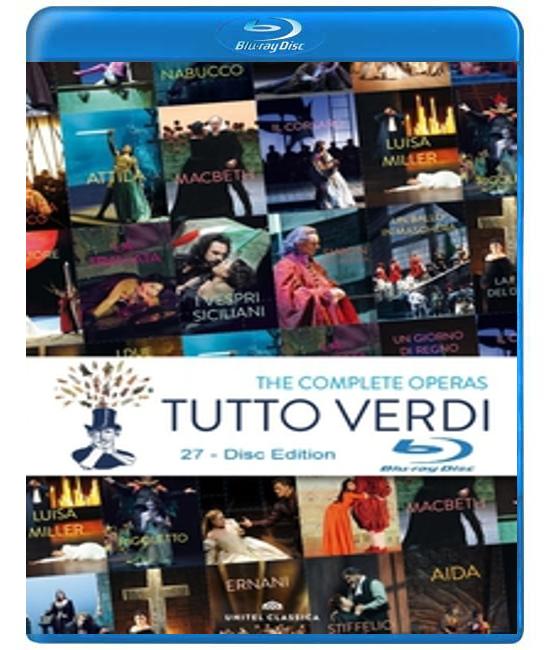 Количество: + -
В заметки
Описание
To mark the bicentenary of Giuseppe Verdi’s birth, the TEATRO REGIO DI PARMAand UNITEL CLASSICA have joined forces to realize a truly unique project. All of the composer’s 26 operas, as well as the Requiem – which is closely related to the operas – are included. Most of them will be performed and audio-visually recorded in and around Parma. For the first time ever, and in time for the composer’s anniversary, Verdi’s complete operatic output will be available in High Definition and Surround Sound and released on DVD and Blu-ray by C MAJOR ENTERTAINMENT. As an additional feature, each release includes a ten-minute introduction explaining the story, characters and history of the opera. Some of the operas will be released for the first time on DVD (Un giorno di regno and Alzira) and many of them will be appearing for the first time on Blu-ray (Luisa Miller, Il corsaro, Giovanna d’Arco, I Lombardi, Nabucco, I due Foscari, Un giorno di regno, I Vespri siciliani, La battaglia di Legnano, Stiffelio, Alzira, I masnadieri, Don Carlo and Ernani).
Giuseppe Verdi was born in the little town of Roncole in the vicinity of Parma and spent the longest period of his life in seclusion close to Parma. He died in Milan in 1901. Today, the region of Parma honours its one-time fellow citizen with the international Verdi Festival organized by the Teatro Regio di Parma. Every year, Verdi’s masterworks are performed in the historical theatres of Parma and neighbouring Busseto over 28 days in the autumn. International singers such as Leo Nucci, Marcelo Álvarez, Renato Bruson, Fiorenza Cedolins, Daniela Dessì and Nino Machaidze and conductors such as Yuri Temirkanov and Gianluigi Gelmetti help to raise these performances to the level of highly acclaimed events in the operatic calendar. Directors include Pier Luigi Pizzi, Daniele Abbado and Pier’Alli. The Teatro Regio was opened during Verdi’s lifetime, in 1829, as the Nuovo Teatro Ducale. It is regarded as one of the most important theatres in Italy. Its audiences, in particular, enjoy a very special reputation as one of the most critical in the world. Many singers report on the fears that grip them while onstage, and others tell about the moments of bliss when they are acclaimed there. It is said that tenors who fail on the stage of the Regio are punished even by the porters at local hotels, who refuse to carry their luggage for them.
Информация
Поддержка
Дополнительно
Мы в соцсетях
Личный Кабинет