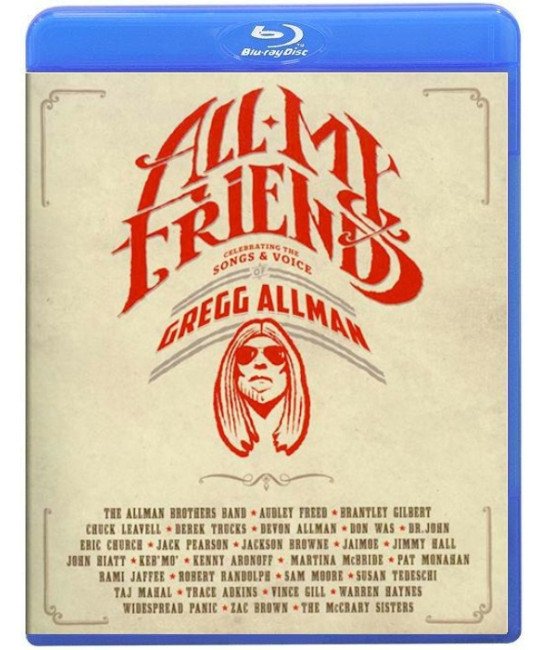 All My Friends: Celebrating the Songs & Voice of Gregg Allman [B

Количество: + -
В заметки
Описание
On January 10, 2014, a star-studded tribute concert to Gregg Allman directed by Don Was was held at the Fox Theatre in Atlanta. All My Friends showcases this show in double-CD/single-DVD and, in light of the subsequent announcement that the Allman Brothers Band would retire at the end of 2014 in the wake of the twin departures of Warren Haynes and Derek Trucks, it gains a certain sense of poignancy. Truthfully, it's hard not to envision this 26-song concert as the inaugural event in a year designed to showcase precisely how rich the legacy of the Allmans and Gregg in particular is. To that end, All My Friends is a rousing success. Perhaps Brantley Gilbert and Pat Monahan seem a little slight compared to all the other muscle on-stage, but both acquit themselves admirably and also indicate how the featured lineup encompasses all sides of the Allmans. Haynes and Trucks open up the show, then there's a stretch that showcases the group's blues and soul roots -- Sam Moore and Keb' Mo' show up, then Taj Mahal and Dr. John show up later -- and there's space made for Americana maverick John Hiatt, '70s peer Jackson Browne, jam band Widespread Panic, and country stars Trace Adkins, Vince Gill, Zac Brown, and Eric Church before the Allman Brothers Band ties things up with "Dreams" and "Whipping Post." Some shine more than others -- Church delights with his sly, soulful singing, Hiatt sounds like a live wire, Moore doesn't sound like he's aged a day -- but there are no weak spots and the overall effect of All My Friends is dazzling; it illustrates just how rich Gregg Allman's contribution to American music is and what we'll miss when he retires. Цитата Треклист: 01. Come And Go Blues (Warren Haynes) 02. End Of The Line (Warren Haynes and Derek Trucks) 03. Stand Back (Susan Tedeschi and Derek Trucks) 04. You Can't Lose What You Ain't Never Had (Devon Allman, Jimmy Hall and Robert Randolph) 05. Please Call Home (Sam Moore) 06. Just Another Rider (Keb Mo) 07. Before The Bullets Fly (Brantley Gilbert) 08. Let This Be A Lesson To Ya (Dr. John) 09. Queen Of Hearts (Pat Monahan) 10. One Way Out (John Hiatt) 11. Statesboro Blues (Taj Mahal and Gregg Allman) 12. Just Ain't Easy (Widespread Panic) 13. Wasted Words (Widespread Panic and Derek Trucks) 14. I'm No Angel (Trace Adkins) 15. Trouble No More (Trace Adkins) 16. Multi-Colored Lady (Vince Gill) 17. All My Friends (Martina McBride) 18. Can You Fool (Pat Monahan and Martina McBride) 19. Ain't Wastin' Time No More (Eric Church) 20. Win, Lose Or Draw (Eric Church) 21. These Days (Jackson Browne and Gregg Allman) 22. Melissa (Jackson Browne and Gregg Allman) 23. Midnight Rider (Vince Gill, Zac Brown and Gregg Allman) Encore: 24. Dreams (The Allman Brothers Band) 25. Whipping Post (The Allman Brothers Band) 26. Will The Circle Be Unbroken (full cast) 27. Outro
Похожие товары (1)

Love for Levon: A Benefit to Save the Barn {2 Disc s Edition}